IS stones to death a youth accused of homosexuality 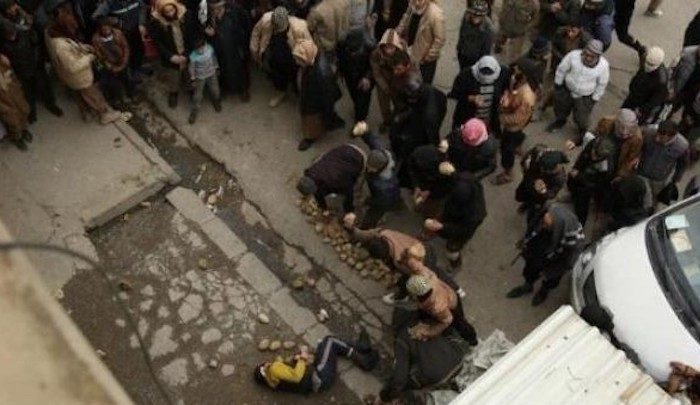 The Islamic State group has sentenced a youth to death by stoning in the city of Mosul, on charges of homosexuality.

The terrorist group published photos on affiliated websites showing a number of IS Diwan al-Hisbah (accountability) members, while reading out death sentence according to Sharia, in the presence of a crowd of people, before carrying out the execution based on “the limits of Allah and Islam”.

The photos revealed that the Islamic State militants started to throw the youth with stones, who was blindfolded, after throwing him from a building’s rooftop, but the exact time and location of the execution were not identified.

The incident is not the first of its kind in Mosul, where the terrorist group claims to implement the limits of God and Islam.

Earlier this year, Islamic State militants sentenced a man to death by throwing him from a high rooftop in Mosul, after accusing him of being homosexual, while used the same method to execute four people, including two of its own members, on charges of homosexuality and sodomy in Dor al-Toub area in central Mosul.