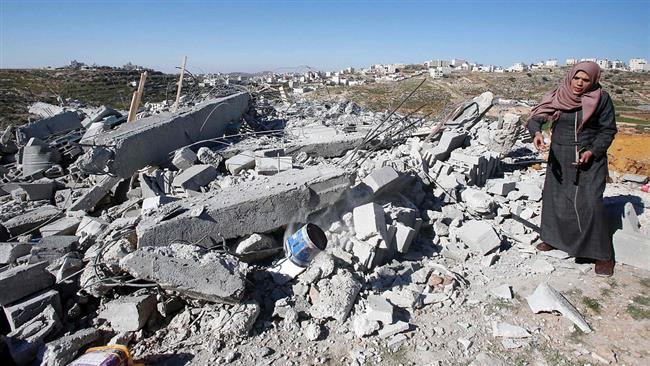 The Israeli forces attacked the Az-Zaeem Village on Monday, using bulldozers to demolish the four buildings.

Separately, an Israeli soldier was wounded during intense clashes that erupted on Monday evening between Palestinian youths and Israeli military forces in the al-Eisaviya Village in the occupied Quds, the local Quds news outlet reported. The Israeli forces took into custody 13 Palestinians following the confrontation.

Israeli soldiers also raided the house of a Palestinian, identified as Omar Hamarshe, in the town of Ya’bod in the West Bank city of Jenin, arresting him.

In yet another development in the occupied territories, 109 Israeli settlers, backed by Israeli troops, entered the tomb of Prophet Joseph east of Nablus, leading to scuffles between the intruding settlers and the local Palestinians in the area.

Over the past months, Israeli forces have fatally shot many Palestinians in the occupied territories, alleging that they had attempted to attack the Israelis.

The Israeli regime has come under fire by rights groups for promoting a shoot-to-kill policy against local Palestinians. The US-based rights group Human Rights Watch (HRW) voiced deep concerns in January over the rising number of Israeli authorities encouraging soldiers to kill Palestinians even when they do not pose a threat.

The HRW released a report on January 2 documenting the numerous statements since October 2015 by senior Israeli officials calling on police and military to shoot dead suspected Palestinian assailants.

The report noted that, since October 2015, there had been over 150 confirmed instances of Israeli forces fatally shooting Palestinian children and adults “suspected” of attempting to attack Israelis.