Jim Himes calls on Republicans to stand up for Trump 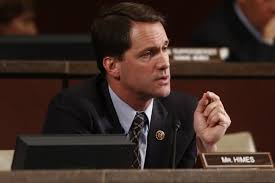 Washington (CNN)A Democratic congressman said Tuesday he believes Republicans need to stand up to President Donald Trump in the wake of his apparent sharing of highly classified information with the Russian foreign minister and Russian ambassador.

"This is historical. My Republican friends need to think about to moments like Joseph McCarthy and who stood with him and who showed courage and said: 'This is not us' or back to the Nixon administration when that administration was coming apart," Rep. Jim Himes told CNN's Chris Cuomo on "New Day."

Trump has been harshly criticized for the decision to share the intelligence last week, but the President insisted Tuesday he had the right to share information with Russia related to terrorism and other issues.
The argument that the President can declassify information when he sees fit is an insufficient justification for his actions, Himes said.

"It may not be illegal, but that's completely besides the point," he said. "If The Washington Post story is to be believed, what happened is the President gave a lot more information than typically would be given."
So far, some Republican lawmakers have expressed measured frustration about the reports but not to the extent Himes called for.

Senate Majority Leader Mitch McConnell asked for "less drama from the White House" when asked during an interview with Bloomberg about the reports Tuesday.

"We have no way to know what was said, but protecting our nation's secrets is paramount," said Doug Andres, a spokesman for House Speaker Paul Ryan. "The speaker hopes for a full explanation of the facts from the administration."

Sen. Bob Corker said the White House appears to be "in a downward spiral" and "the chaos that is being created by the lack of discipline is creating an environment that I think -- it creates a worrisome environment."

And Nebraska Sen. Ben Sasse called on Trump to remember that Russia is not an American ally.

"Our interests and Russia's interest do not align. Putin is a bad guy," he said Tuesday on CNN's "New Day."
He added, "So, it's not at all helpful that this happened with Russians, but again, particulars about the meeting, we don't know all that much yet."