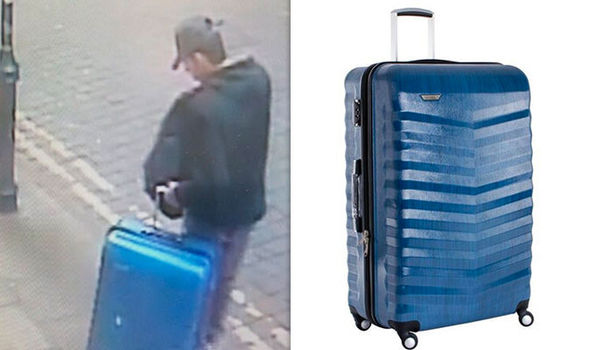 The 22-year-old, who carried out last Monday's attack, was filmed by a CCTV camera in Manchester city centre on May 22.

The suitcase is believed to be a major piece of evidence in the case, and the public has been urged not to approach it if they see it.

A police spokesman said: "We believe Abedi was in possession of this case in the days before the attack at Manchester Arena last Monday.

"I want to dress that this is a different item than the one he used in the attack. This image was taken from CCTV in the city centre on May 22.

"We have no reason to believe the case and its contents contain anything dangerous, but would ask people to be cautious.

"Anybody with information about the whereabouts of the case between 18 and 22 May should call the Anti-Terrorist Hotline in confidence on 0800 789 321.

"The public should not approach the case if they see it but contact police immediately on 999."

It is known that he visited the Wilmslow Road area of Manchester, also known as the 'Curry Mile', days before the horrific blast.

GMP are urging anyone with details about the suitcase to get in touch and let them know.

Police have been working round-the-clock since the cowardly jihadist blew himself up with a home-made nail bomb last Monday.

The race to dismantle a suspected network connected to British-born Abedi saw a flurry of arrests over the weekend.

Armed police launched raids in the Gorton and Old Trafford areas of Manchester.