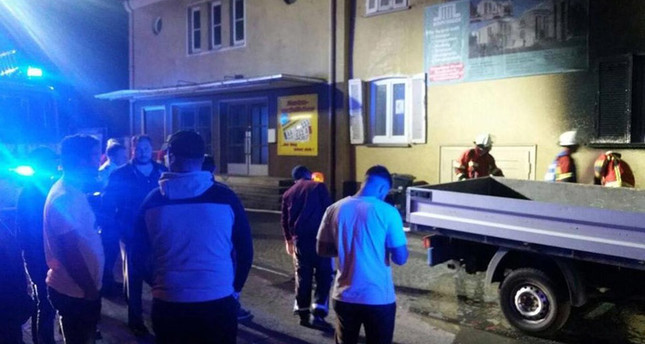 A mosque in the city of Bopfingen in southern Germany's Baden-Württemberg state was targeted by arsonists last Sunday.

According to initial findings, four unknown perpetrators attacked the mosque at approximately 03:00 a.m. and then fled the scene on bicycles.

Members of the Turkish-Islamic Cultural Association were present at the mosque at the time of the arson attack, preparing themselves for next day of fasting in observance with the holy month of Ramadan.

The fire was noticed by members of the community, who immediately informed the police and fire department.

The attack resulted only in property damage, while the three families residing in the building, including the Imam's family, were not harmed.

The Imam of the Bopfingen Mosque Abdullah Seki told Daily Sabah that he and his family were in their apartment on the night of the attack.

"As our apartment is on the back side of the building, I could not see the fire. But the bell rang suddenly at around 3:00 a.m. Neighbors saw the garbage cans in front of the mosque on fire and informed us," Seki said.

The walls of a mosque in southern Germany's Freiburg were spray painted with Nazi symbols only two weeks ago, while the Ottoman Sufi Center in Berlin was also the victim of a recent attack, during which the windows of the prayer room were smashed.

The number of attacks on mosques and Turkish associations in Europe has seen a sudden increase in recent years. In almost all cases, the attacks were reported to have been organized by PKK sympathizers or right-wing extremists.

The German Interior Ministry previously announced that 1,698 violent right-wing crimes were recorded in 2016, up from 1,485 the previous year.