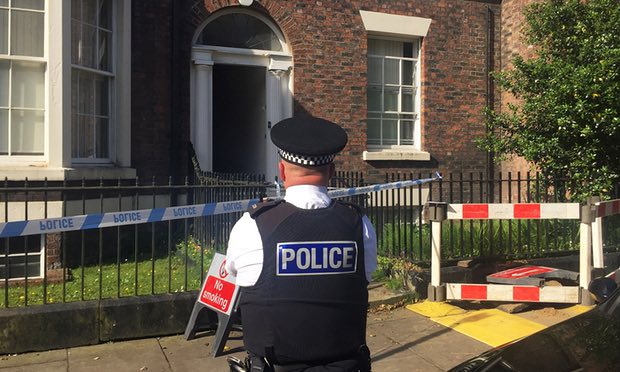 The bodies of a woman and two children have been found at a flat in Liverpool that John Lennon lived in.

Police were called to a ground floor flat on Falkner Street, near Toxteth, Liverpool shortly before 19:30 BST on Tuesday.

A man, 30, was detained on suspicion of murder before being taken to hospital after falling ill.

Merseyside Police believe the incident was domestic in nature. They are not looking for anyone else.

The force added a post-mortem examination will be carried out to establish the causes of death.

Neighbours said the property in Georgian Quarter was regularly visited by Beatles fans on tours of the city as the band's manager Brian Epstein had owned the flat, which Lennon lived in with his first wife Cynthia shortly after they got married in 1962.

One man, who did not want to be named, said: "The tourist tours are always stopping at the house because John Lennon used to live there."

He said a family with two young children had lived in the flat.

"I didn't know them, I just knew there was a family living there. The children were toddler age," he said.

Residents on the street were evacuated from their homes because of concerns over a gas leak but they have been allowed back into their homes, said police.

Falkner Street and Catharine Street were closed but the roads have since reopened.

One woman said: "The police said we had a couple of minutes to get out of the house.

"There were ambulances, fire engines and police here. We weren't allowed back in until about 11pm."

Detectives are appealing for anyone who may have information to contact them.

John Lennon, who was born in Liverpool in 1940, divorced Cynthia in 1968 and married Yoko Ono the following year.

He was murdered by Mark Chapman, who shot him on 8 December 1980, in New York.