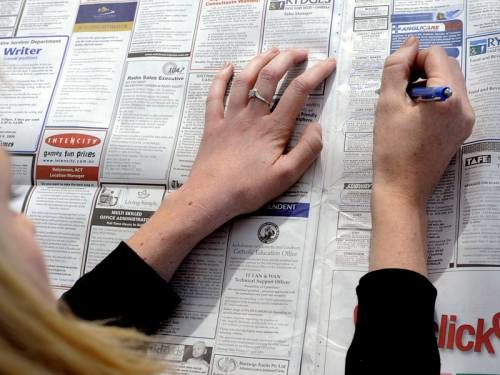 The number of Americans filing for unemployment benefits fell last week, unwinding half of the prior period's jump and suggesting the labor market was tightening despite a recent slowdown in job growth.

Initial claims for state unemployment benefits declined 10,000 to a seasonally adjusted 245,000 for the week ended June 3, the Labor Department said on Thursday.

Claims surged by 20,000 in the prior week, with California, Tennessee, Kansas, and Missouri accounting for the bulk of the increase. Some of that increase was related to school summer breaks in which bus drivers and cafeteria workers were left temporarily unemployed.

Claims have now been below 300,000, a threshold associated with a healthy labor market, for 118 straight weeks. That is the longest such stretch since 1970, when the labor market was smaller. The labor market is near full employment, with the jobless rate at a 16-year low of 4.3 percent.

Economists polled by Reuters had forecast first-time applications for jobless benefits falling to 240,000 in the latest week.

Prices of U.S. Treasuries were lower while U.S. stock index futures were modestly higher after the data. The dollar was firmer against a basket of currencies.

A Labor Department official said there were no special factors influencing the data. Only claims for Louisiana were estimated.

The four-week moving average of claims, considered a better measure of labor market trends as it irons out week-to-week volatility, rose 2,250 to 242,000 last week.

Low layoffs and record high job openings suggest the deceleration in job growth in May was likely because companies could not find suitable workers. The economy created 138,000 jobs in May, well below the average monthly 181,000 jobs gained over the prior 12 months.

The Labor Department reported on Tuesday that job openings, a measure of labor demand, increased 259,000 to a seasonally adjusted 6.0 million in April, the highest level since the government started tracking the series in 2000.