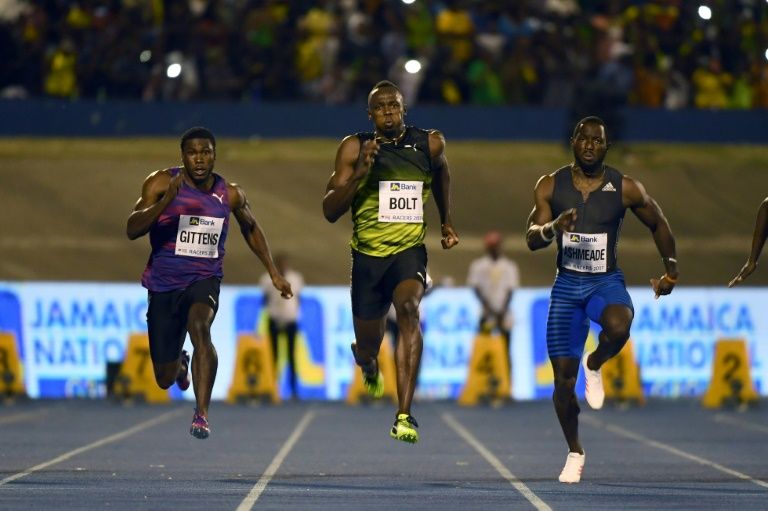 Usain Bolt partied with his devoted fans in an emotional farewell at the National Stadium on Saturday as he ran his final race on Jamaican soil.

Bolt is retiring in August following the London World Championships.

On Saturday Bolt was determined to put on a spectacle as he won the 100 metre "Salute to a Legend" race in front of a raucous crowd of 30,000 on the same track where he launched his international career in 2002.

The 30-year-old Bolt exploded out of the blocks and cruised to victory in a time of 10.03, well below his world record time but good enough to beat a solid field that included runner-up Javaughn Minzie of Jamaica.

After the race the world's fastest man took a victory lap then returned to the track and the No. 5 lane where he kissed the finish line before flashing his signature lightning bolt pose for the final time at home in his glorious career.

The nine-time Olympic gold medallist Bolt did not run in the fastest 100 metre race of the evening, but his devoted fans didn't care.

Bolt ran in front of a sea of green and yellow clad Jamaican fans who showed their pride by dancing, waving flags and blowing vuvuzela horns while fireworks lit the sky.

Since this was his first 100m of 2017, Bolt said he was more concerned with putting on a good show Saturday as he eases his way into the season.

The Jamaican speedster Bolt said at Thursday's news conference that 2017 will be more about saying thank you to his fans rather than trying to break his world records of 9.58 seconds in the 100 metres and 19.19 seconds in the 200 metres.

Jamaica's Yohan Blake won the other 100m in a time of 9.97 seconds, finishing ahead of South African Akani Simbine who clocked 10.00