IS leader Baghdadi has been killed - Claim 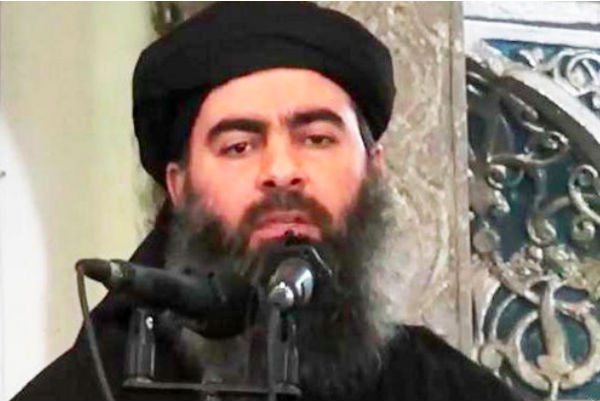 The leader of Islamic State has been killed in an air strike in Syria, according to unverified reports in Syrian state media.

Claims suggest the leader of ISIS Abu Bkr al-Baghdadi was killed in an air strike on Saturday.

Heavy artillery was dropped across the ISIS stronghold of Raqqa throughout the day, with footage online posted by ISIS news agency Amaq revealing the devastation caused.

The Islamic State leader has a £20million bounty on his head because his hate-filled sermons inspired suicide attacks across Europe. There have been previous reports of al-Baghdadi's death, which turned out to be untrue.

Recent evidence unearthed for a documentary shows Abu Bakr al-Baghdadi escaped capture in Iraq by just minutes back in 2013, before unleashing his army of jihadis on the world.

The revelation has emerged as Iraqi forces claimed al-Baghdadi’s deputy, Ayad al-Jumaili, was killed in an air strike near Iraq’s border with Syria..

Jumaili, an intelligence officer under Saddam Hussein, was described in an Iraqi TV report as Islamic State’s “second-in-command” and “war minister”.

As Iraqi forces besiege al-Baghdadi’s former stronghold in Mosul, the caliphate he declared in the city’s main mosque back in 2014 is crumbling apart.

The film, Abu Bakr al-Baghdadi: In The Footsteps Of The Most Wanted Man In The World, suggests swifter reactions earlier in the 45-year-old’s rise to power might have brought an end to the IS reign of terror sooner.

Like Saddam Hussein before him, al-Baghdadi was hiding in a basement bolthole, accessed through a disguised entrance in a tiled floor.

He escaped the hideout in northern Baghdad before soldiers arrived, leaving behind a cache of weapons, documents and black IS flags – the now familiar symbol of the reviled terror network.

The mission’s failure enabled the extremist, born in the Iraqi city of Samarra, to become the world’s most wanted man at the helm of a self-declared caliphate across his home country and neighbouring Syria.

And despite being the target of multiple bombing raids, analysts believe he remains at large.

He was reportedly badly wounded during an airstrike in the same district in March 2015. As with so many stories surrounding al-Baghdadi, what really happened remains a mystery.

In the film, Amara claims she too is holed up near the Iraq-Syria border.