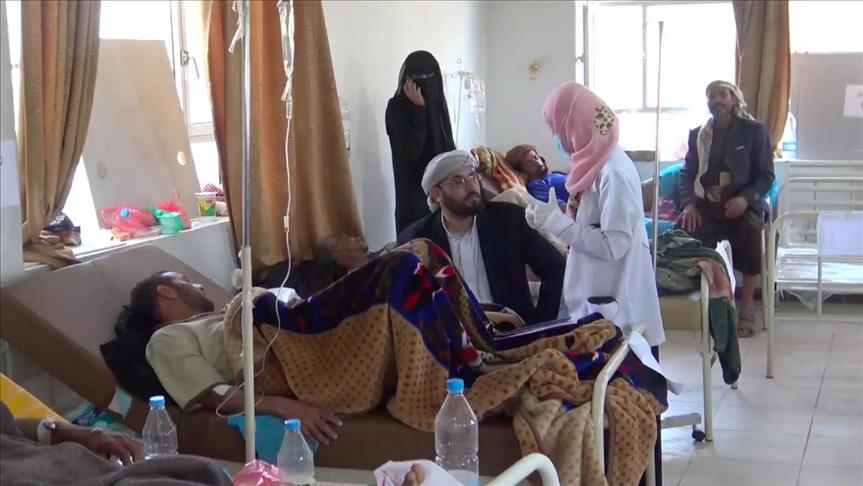 Millions of people are facing hunger and disease due to political instability and conflict in Yemen, aid organizations have told Anadolu Agency.

Representatives of the UN, the World Food Program (WFP), World Health Organization (WHO), UNICEF and UN Office for the Coordination of Humanitarian Affairs (OCHA) described the worsening situation in the war-torn country.

According to the WFP, 17 million Yemenis in the 27-million-strong country are food insecure -- with almost seven million of facing serious shortages.

OCHA spokesman Jens Laerke described a famine in the country as “human-made”. Laerke said only 28.3 percent of the $2.1 billion needed under the UN 2017 Yemen Humanitarian Plan had been financed so far.

The country also has been facing a cholera epidemic since last April; this has killed at least 923 people since late April, according to the WHO.

The WHO's Yemen office said over 124,000 suspected cases of cholera had been registered across the country since April 27.

In a joint statement, the WHO and UNICEF said the number of suspected cholera cases in Yemen had reached 101,820 as of June 7.

“The cholera outbreak is making a bad situation for children drastically worse. Many of the children who have died from the disease were also acutely malnourished,” said Dr. Meritxell Relano, UNICEF’s representative in Yemen.

“Today, life for children in Yemen is a desperate struggle for survival, with cholera, malnutrition and the relentless violence constantly sounding a death knell at their doorsteps,” she said.

WHO spokesman Tarik Jasarevic said the worst affected were children under the age of 15 years -- accounting for 46 percent of these cholera cases -- and those aged over 60 years, representing 33 of cholera-related fatalities.

Jasarevic said the health system had been destroyed due to intense conflict over the last two years. He added that the infrastructure system was severely damaged by the fighting and, as a result, 14 million people were unable to access clean water.

WFP spokeswoman Bettina Luescher said two out of three of the county’s population lived without knowing where their next meal would come from: “We are racing against time to prevent famine.”

Luescher said the agency needed at least $468 million to avert a hunger crisis in Yemen where around one million people had been displaced.

UNICEF spokesman Christophe Boulierac said the number of school-age children in Yemen was 7.3 million and two million of these were unable to go to school.

Boulierac said 1,600 schools were out of use while 248 others had been destroyed due to airstrikes and bombardments.