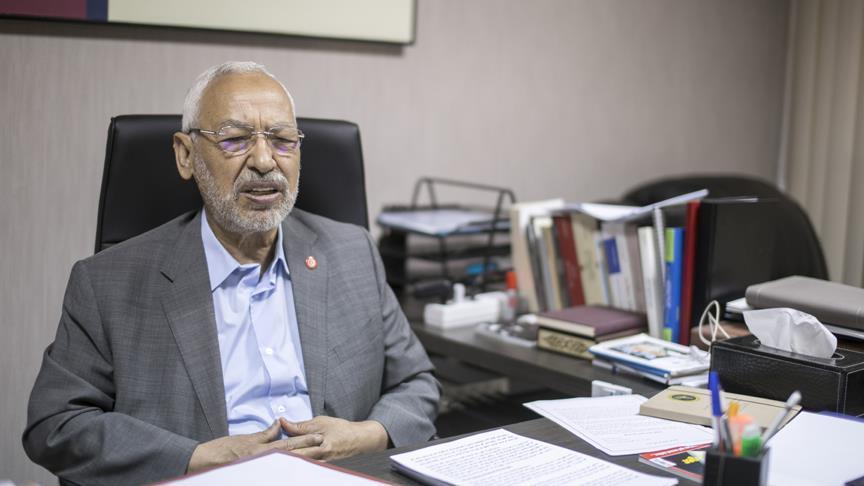 Rachid Ghannouchi, the leader of Tunisia’s Ennahda movement, has voiced his hope that the diplomatic crisis currently plaguing the Arab world might be resolved before the end of Ramadan on June 25.

In an exclusive interview with Anadolu Agency, the Tunisian leader described Turkey’s position on the ongoing crisis as “genuine and principled”.

Ankara, he said, “is distressed by this falling out between brothers”.

He stressed that Saudi Arabia had enjoyed good relations with Tunisia both before and after the eruption of the “Arab Spring” uprisings in 2011.

“Qatar, too, had good relations with Tunisia both before and after the revolution [i.e., the uprisings] and has stood with all Tunisian governments,” he said.

“Qatar played a very prominent role, which contributed to the success of [last November’s] international conference on investment that was attended by [Qatari Emir] Sheikh Tamim in a clear declaration of support for Tunisia,” he added.

“Therefore, like the Turks, Tunisians have been distressed by recent events in the Gulf and look to the leaders -- to the custodian of the two holy mosques -- to guide his sons towards a common stance,” Ghannouchi said, citing calls by Turkish President Recep Tayyip Erdogan for reconciliation before the end of Ramadan.

He went on to voice his sadness that the current crisis in inter-Arab relations had occurred during the Muslim fasting month.

“We are very sorry about these disputes… Muslims like to see the Arabian Peninsula enjoying peace, wellbeing and development,” he said.

According to Ghannouchi, Ennahda has consistently called for dialogue “with a view to ending these disputes and securing an immediate halt to the ongoing boycott [of Qatar], which has no place between brothers -- regardless of the severity of the dispute”.

“All of them [i.e., the Arab states] are our brothers,” he said. “We hope to see them reconcile. The Gulf Cooperation Council should not only strive to achieve its material interests, but also to achieve its brotherly, spiritual and political interests.”

He also commended “positive efforts” by both Kuwait and Oman to foster reconciliation between the various parties to the ongoing crisis.

The Arab Gulf states, he said, “share the same social and religious fabric. There is no other part of the world that shares such strong religious, sectarian and cultural ties”.

“Therefore,” Ghannouchi asserted, “we support the Tunisian government’s stance [regarding the crisis], considering it an extension of Tunisia’s historical policy regarding disputes between Arab brothers.”

Qatar, for its part, strenuously denies accusations that it is a supporter of terrorism, calling recent moves to diplomatically isolate it as “unjustified”.