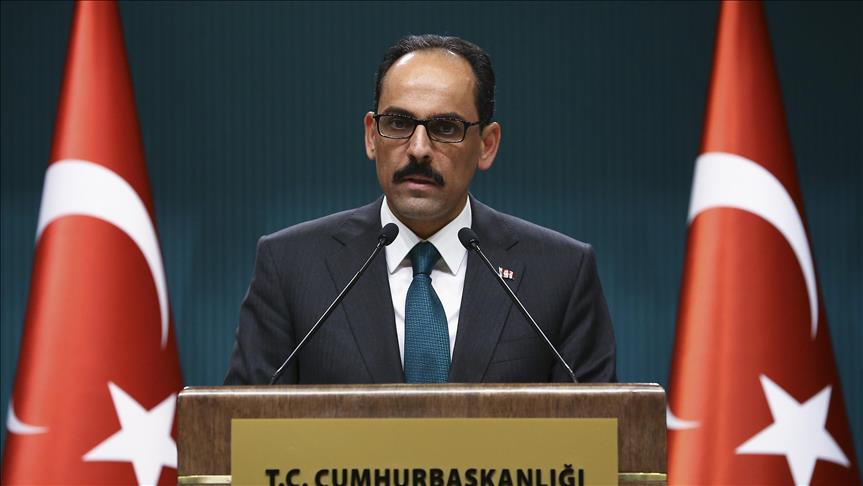 Addressing reporters at the presidential complex in Ankara, Kalin said Turkey's priority was to fix the Gulf conflict through negotiations instead of increasing the tension.

Qatar, for its part, has denied the accusations, calling the moves to diplomatically isolate it “unjustified”.

Ankara has said that it stands with the tiny Gulf state against sanctions and has urged Riyadh to take the lead in finding a solution to the crisis.

"The king of Saudi Arabia, as leader of the Gulf, should solve this issue,” President Recep Tayyip Erdogan said Tuesday. “I especially think that he should lead the way towards resolving this crisis."

Kalin also said Turkey's decision to deploy Turkish troops in Qatar aimed at ensuring the safety of all countries in the region, not at intimidating.

"With this base, Turkey aims to enhance the cooperation between Turkey and Qatar as well as with the other Gulf states," he said.

A deal aimed at improving the country's armed forces and boosting military cooperation had been signed in April in Doha.

Kalin also addressed the situation in northern Iraq saying the negotiations between Turkey and the Iraqi Kurdish authorities would continue and describing the independence referendum decision as "wrong".

Kurdish Regional Government (KRG) leader Masoud Barzani said last week that a vote on independence from Iraq would be held on Sept. 25 -- a move the Turkish Foreign Ministry had called a "grave mistake".

"Our primary aim is to correct this mistake through negotiation. We will keep working on this issue," said Kalin. "To adopt an immediate sanction such as closing the border gate without sitting with them is out of question."

"Instead of solving the problems that Iraq faces, it is a step that deepens them," he added.