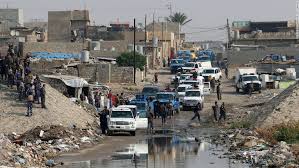 Iraqi forces have retaken another neighbourhood in their fight against ISIS in west Mosul.

The capture of Zanjili leaves the areas of Shifa and Bab Sinjar under control by the Islamic State of Iraq and the Levant.

After taking these two areas the forces will be able to surround the old city of Mosul, where tens of thousands of civilians are trapped amid ISIS fighters.

The final push that began on May 27 has resulted in the destruction of large parts of the city and hundreds of civilian deaths.