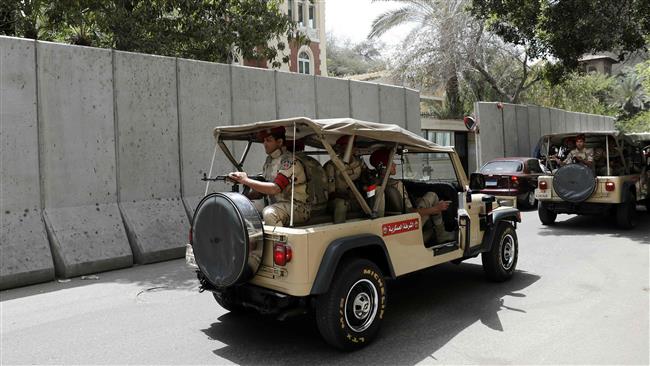 A roadside bomb blast has left one policeman dead and four other people injured near the Egyptian capital of Cairo, Egypt’s Interior Ministry says.

Axar.az reports citing Press TV.
The ministry said in a statement that the casualties took place early on Sunday when the bomb targeted a police vehicle that was carrying a group of police officers and conscripts near the Maadi district of Cairo.
“At around 12:45 a.m. on June 18, as a vehicle belonging to the Central Security Forces transported a group of officers and conscripts, an improvised explosive device planted on the roadside went off,” the statement said.
“This led to the martyrdom of First Lieutenant Ali Abdelkhaliq and the injury of four others, an officer and three conscripts, who have been taken to hospital for treatment,” it added.
A senior official in the Egyptian Interior Ministry said that the bomb had been detonated remotely and that an initial examination suggested that the explosion had been triggered using a mobile phone SIM card.
The official added that a joint task force made up of several police units was investigating the blast and questioning residents in the area to try to identify and arrest the culprits.
No group or individual has so far claimed responsibility for the deadly incident, but it comes at a time when Egyptian forces are fighting the Daesh-affiliated Velayat Sinai terrorist group in the restive Sinai Peninsula.
Hundreds of security forces have been killed during violent clashes with the militants or in attacks carried out by them across the troubled region in recent months. The Sinai Peninsula has been under a state of emergency since October 2014, following a deadly terrorist attack that left 33 Egyptian soldiers dead.
Over the past years, militants have been carrying out anti-government activities and fatal attacks, taking advantage of the turmoil caused in Egypt after the democratically-elected president Mohamed Morsi was ousted by the military in July 2013.
The Velayat Sinai Takfiri terrorist group, which pledged allegiance to Daesh in 2014, has been responsible for most of the attacks in the Sinai Peninsula as well as in Cairo.
In April, two separate roadside bombs in the Egyptian Sinai Peninsula claimed the lives of two police officers and injured one civilian.