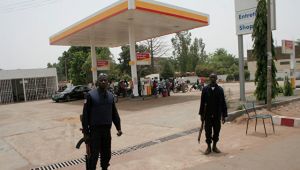 A suspected terror attack is underway on a luxury holiday resort frequented by tourists in Mali.

Axar.az reports citing Independent.
Security forces said operations against an unknown number of gunmen at Le Campement, outside the capital Bamako, are ongoing.
“Security forces are in place. Campement Kangaba is blocked off and an operation is under way,” said Malian security ministry spokesman Baba Cisse.
“The situation is under control.”
The rural resort - popular with Western tourists, expats and locals - offers luxury accommodation, a spa and three swimming pools, as well as running excursions and sports for guests.
Like the majority if hotels around Bamako, visitors undergo mandatory security checks by guards upon entry, according to online reviews.
Le Campement sits on the outskirts of the city, where the Radisson Blu hotel was the target of a previous terror attack that left more than 20 people dead in November 2015.
It was one of a series of shootings and bombings to sweep the country as part of an ongoing insurgency by Islamist militants in the north, which has worsened in recent months.
French troops are supporting Malian government forces, while the violence has made the UN peacekeeping mission in the country the deadliest in the world.
Despite the deployment of 11,000 peacekeepers since France’s first intervention in 2013, Islamist groups have been re-gaining strength in recent months, launching a series of attacks on the military as they push south.
Monitors have warned of a deteriorating situation for civilians living under the brutal rule of extremist militias, carrying out stonings, executions and violently enforcing Sharia law amid continued struggles with poverty and starvation.
Al-Qaeda linked jihadi factions hold large swathes of desert in northern Mali, after hijacking an uprising by ethnic Tuareg rebels who launched an advance in 2012, bolstered by the free flow of militants and weapons from the Libyan civil war.
The latest alliance to form is Jama’at Nusrat al-Islam wal-Muslimin (Group for the Support of Islam and Muslims or al-Qaeda in Mali), which incorporates al-Qaeda in the Islamic Maghreb, al-Mourabitoun, Ansar Dine and the Macina Liberation Front.