Muslims pray on the street after attack 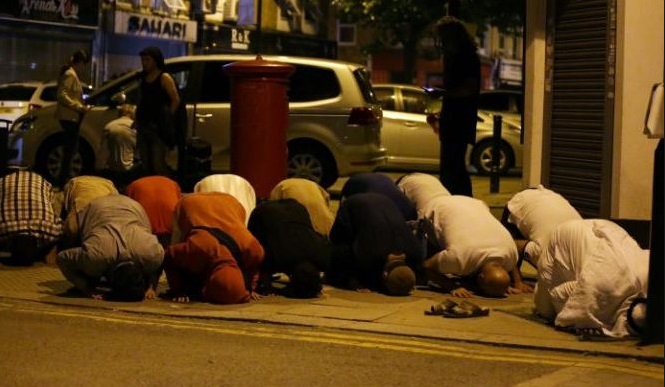 Muslims reacted peacefully with prayer after the attack on their community.

A van veered into pedestrians outside a mosque in Finsbury Park in what has been described as a terror attack.

After some of them held down the suspect until he was taken away by police, muslims gathered together to pray.

They were joined by the local Jewish community as well as people of other faiths.

According to reports on social media, the Ramadan prayers at the Finsbury Park mosque prior to the attack were focused around the Grenfell Tower victims.

The Chairman of Finsbury Park Mosque wrote last week: "#FinsburyParkMosque raised £3000 so far for the victims of #GrenfellTower fire, we will keep fundraising and this is the least we can do."

He said: "During the night, ordinary British citizens were set upon while they were going about their lives, completing their night worship.

"My prayers are with the victims and their families. It appears from eyewitness accounts that the perpetrator was motivated by Islamophobia.

"Over the past weeks and months, Muslims have endured many incidents of Islamophobia, and this is the most violent manifestation to date.

"Given we are approaching the end of the month of Ramadan and the celebration of Eid with many Muslims going to local mosques, we expect the authorities to increase security outside mosques as a matter of urgency."

He added: "Many will feel terrorised, no doubt be angry and saddened by what has taken place tonight.

"We urge calm as the investigation establishes the full facts, and in these last days of Ramadan, pray for those affected and for justice."

The Archbishop of Canterbury said: "The attack at #FinsburyPark mosque is abhorrent. We stand in solidarity with our Muslim friends and pray for the bereaved and injured."

There has been an increase in hate crime reports since the Manchester Arena bombing and the London Bridge attack.

Prime Minister Theresa May issued a statement saying she would be chairing an emergency meeting on Monday morning and adding: "All my thoughts are with the victims, their families and the emergency services on the scene."

One resident told the Press Association he jumped out of the way as the van struck pedestrians.