Thousands march in Greece against NATO 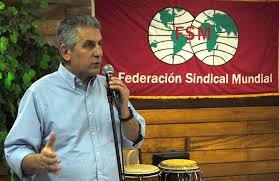 The demonstrators are protesting NATO interventions and military bases.

Axar.az reports that thousands of Greeks have taken to the streets to protest the North Atlantic Treaty Organization (NATO) in a massive two-day “anti-imperialist” demonstration organized by the All-Workers Militant Front (PAME) in Thessaloniki.

The demonstrators, many from various trade unions from both Greece and abroad, are protesting NATO interventions and military bases, chanting slogans such as "Murderers, thieves and hypocrites are the European imperialists!" and "Crisis, wars, uprooting, this is capitalism!"

“Our enemies are not the neighboring people, but NATO and the bases," declared Giorgos Perro, part of PAME's Executive Committee.

Zeljko Veselinovic, president of the Serbian Trade Union SLOGA, on behalf of all foreign trade unions attending the rally, affirmed PAME’s solidarity to Greece's working class during NATO’s 1999 bombings in the former Yugoslavia.

"We, the workers, are brothers regardless race, religion or skin color and that will be forever. Nobody is going to subdue us. We are stronger and they will never beat us", he stated.

Lieutenant-Colonel Papanastasis, a member of the "Movement for National Defense", former Greek army officers and politicians who rebelled, added, "We, the military officers, have passed the largest part of our life in the camps and have a first-hand knowledge of what 'NATO' means.”

“We know the dimension of the dramatic consequences for the people, resulted by our country's participation on that. We know what blood-stained operational plans it has. Everyone knows the slaughtering of the people of Yugoslavia, as well as of other people," he continued.

The two-day demonstration ends Sunday with an international meeting of trade unions in the region.