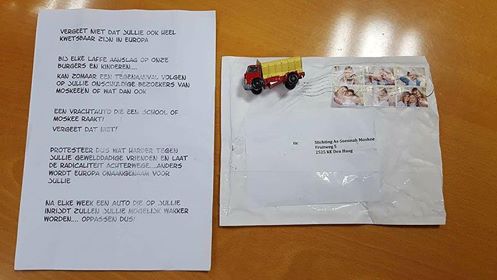 The as-Soennah mosque in The Hague received a letter in which an anonymous writer seems to threaten with an attack with a truck on a mosque or school. "Don't forget that you're vulnerable too in Europe", the letter begins. The envelope also included a toy truck.

"With every cowardly attack on our citizens and children, a counter-attack can follow on your innocent visitors of mosques or whatever. A truck that hits a mosque or school! Don't forget that!", the letter states. "So beware."

The board of the as-Soennah mosque confirmed the letter to Omroep West. It was received before Eid. "We kept it quiet as to not create unrest, but there was extra police supervision at the mosque", the board said.

The as-Soennah foundation is "very shocked and upset to receive this threat in the month of Ramadan, when it is very busy in and around mosques". The mosque management added that it can nog be ignored that the "smear campaign" against Islam and Muslims by certain politicians and media may have added to this threat.

The mosque will press charges on Monday. "Then we start investigating the origin of the letter", a police spokesperson told.