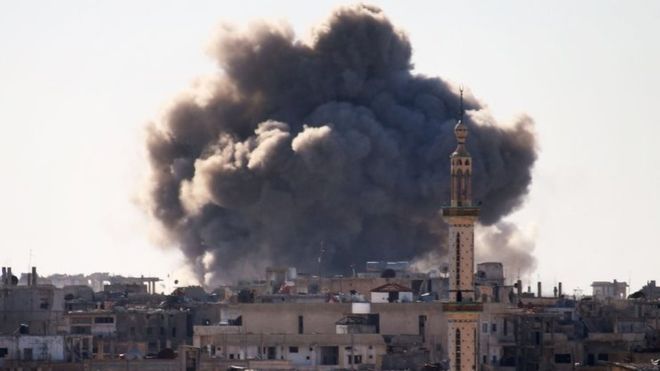 The Russian Defense Ministry said Syrian government forces during the liberation of Deir ez-Zor have captured a large fortified position held by Daesh terrorists some of whom originated from Russia and other ex-Soviet republics.

Syrian government forces during the liberation of Deir ez-Zor have captured a large fortified position held by terrorists from the Islamic State group (Daesh) and found evidence that the defenders originated from Russia and other ex-Soviet republics, the Russian Defense Ministry said Wednesday.

"Evidence confirming previous intelligence reports from various sources indicating that the position was defended by terrorists with Russian and CIS origin was found after the liberation of the area," the ministry said in a statement.

According to the statement, 12 armored vehicles, including four tanks, six artillery and mortar firing positions, a command post and a communication center, as well as three ammo depots were destroyed, and more than 200 terrorists were killed during the Deir ez-Zor operation.

On Tuesday, Russian Defense Minister Sergey Shoigu informed Russian President Vladimir Putin on the Syrian army's successful operation to lift the 3-year-long blockade of Deir ez-Zor. According to the minister, Russian air and cruise missile strikes helped to ensure the success of the operation.

According to Kremlin spokesman Dmitry Peskov, the Russian president sent a telegram congratulating Syrian leader Bashar Assad "on this important step towards the liberation of the territory of Syria from terrorism."