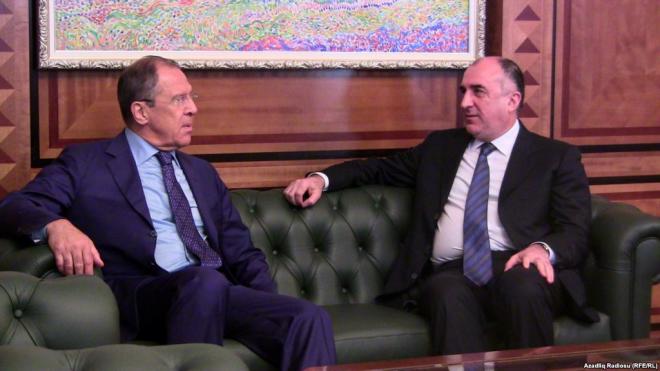 Today Russian Minister of Foreign Affairs Sergey Lavrov is on an official visit to Azerbaijan. Yesterday S.Lavrov was received by the President of the Republic of Azerbaijan H.E Mr. Ilham Aliyev and a very productive discussion was held during the meeting.

As you probably know, the format is the same for us, at first we communicated in the tete-a-tete, then in an expanded format. First of all, we, yesterday and today, discussed the role of Russia as the Co-Chair of the OSCE Minsk Group, on the settlement of the Armenia-Azerbaijan Nagorno-Karabakh conflict. I briefed Minister Lavrov on the position of Azerbaijan, and on the results of the recent discussions in Moscow with the Co-Chairs. I had very intensive, substantive negotiations with the Co-Chairs. We discussed specific issues, on those issues to which, at the moment, it is impossible to find a solution for today. Today I also informed my colleague, before his trip to Yerevan, that there are options of solutions that can help us to move forward from the situation that we are now. It is clear that, and this has been repeatedly stated by the Co-Chairs, at all levels including the highest one, that the current situation in the conflict zone does not suit anyone. The existing status quo is both unacceptable and unsustainable. And in this context, of course, we all need to find solutions to move forward.

Political basis of our relations is reflected in the Baku Declaration on Friendship and Strategic Cooperation of July 3, 2008.

We also discussed steps to expand trade turnover and intensify trade relations between our countries, which is increasing every day. Already we can talk about the multibillion-dollar trade turnover between Azerbaijan and Russia. We believe that there is an opportunity to continue to increase it. Because a new and interesting component is on the agenda, recent discussions that took place in Tehran at the level of the Presidents of Azerbaijan, Iran and Russia, in the context of launching the North-South transport corridor in full effect. We believe that this corridor has very large potential, great opportunities, since, first of all, it reduces the way of passing cargo from the north of Russia, Europe to the Asian countries, and we can also talk about India and China as the final destination of these transportation routes.

We also discussed inter-parliamentary cooperation. There are many issues where Azerbaijan and Russia share the same interest. If we talk about cooperation in international organizations, consultations take place at the MFA level, practically on all issues on the agenda, which are discussed in various international organizations, the United Nations, the OSCE, the CIS, the Council of Europe, etc.
I want to touch upon the development of humanitarian cooperation. Probably, all know how carefully the Russian language is treated in Azerbaijan. Even during the 26th years of the independence of our country and the 25th anniversary of establishment of diplomatic relations between Azerbaijan and the Russian Federation, the attitude towards the Russian language has not been changed since we were part of the same state.

In general, I would assess the level of our relations and the spirit that was within our discussions quite positively. Of course, there are questions, I would not say that there are problems, but there are issues, the solution of which requires its finding. In any case, with goodwill, with the appropriate spirit, we will discuss and find common ground and solutions.
Thank you for your attention!

Representative of "Russia Today" Khalid Jamalovich: Were there new ideas during your meeting, on the solution of Armenia-Azerbaijan conflict over the Nagorno-Karabakh conflict? Are you going to expand the membership of the countries that take the mediation position to resolve this conflict in order to avoid the incidents of 2016?

Elmar Mammadyarov: Every new is a well-forgotten old. All ideas are on the table. We need to gather all existing ideas in a single document that will be acceptable for parties to the conflict. This is not an easy task. If the solution to this problem were easy, then we would have decided it long ago. With regard to the expansion of the mediation mechanism, I can say so, if you have three co-chairs who constitute the majority as permanent members of the Security Council, then who else can they be expanded? If you mean neighboring countries, and then let's say Turkey, Turkey is already a member of the OSCE Minsk Group. And Turkey within the framework of the OSCE quite actively works with other states. You mentioned the events of 2016. This is stated all the time - the existing status quo, it is unacceptable, unsustainable. And in this case, of course, if you look at the root, first of all, everyone understands that the co-chairs are mediators. It is necessary to take the last step and show political will. And in general, all are perfectly aware of: in what form and how we should move, and how to solve this conflict. Of course, the speed of moving forward is understood in different ways. Azerbaijan demands, in accordance with the resolutions of the UN Security Council of 1993, the immediate, full, unconditional withdrawal of armed forces of Armenia from the occupied territories of Azerbaijan. In this context, it is necessary to talk about increasing of efforts threefold.

Victoria Zhavoronkova, Information Agency "Report": My first question is about bilateral relations, in a slightly different format. As it was noted, Azerbaijan and Russia build trustful relations not only in bilateral, but also in trilateral format. Could you, please, tell us whether plans for the creation of trilateral formats with other friendly countries are expected in the near future? For example, Azerbaijan-Russia-Turkey, or Azerbaijan-Russia-Kazakhstan, etc.

The second question is addressed to Mr. Lavrov. Despite the UN Security Council resolutions on the Nagorno-Karabakh conflict, which is still not resolved, how do you see the way to ensure cease the fact of occupation of Azerbaijan's lands and withdrawal of the armed forces of Armenia from the occupied territories?

Elmar Mammadyarov: Each format should have some basic component for organizing trilateral meeting. For example, the Russia-Azerbaijan-Iran format is on the basis of a joint interest in the development of the international transport corridor North-South. Therefore, I would approach the answer to this question depending on what is the real substance. Regarding the format of Azerbaijan-Russia-Turkey trilateral format, it would be reasonable when Russian railways can transport cargo by using Baku-Tbilisi-Kars railway and through this corridor to Turkey to the Mediterranean Sea. I want to announce that on November 30, we will have a meeting at the level of Foreign Ministers of Azerbaijan-Pakistan-Turkey. It will be held in the framework of Istanbul Process-Heart of Asia for Afghanistan in Baku. And accordingly, there was a discussion about holding a trilateral meeting. In general, my Kazakh colleague expressed interest in the trilateral format. I think that this format has the right to life, and that it is sufficiently optimal for the development of regional processes.

And the last thing I would like to say about the resolutions of the Security Council. They do not have a statute of time limitations. All three resolutions state not a request, but a demand, on the withdrawal of troops of Armenia from the occupied territories of Azerbaijan. I, in this case, have no doubt that these resolutions will be implemented. It's just a matter of time, as I said before. We go with a different move in this direction.