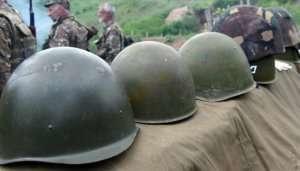 The Armenian Armed Forces continue the exercises in the occupied territories of Azerbaijan.

Axar.az reports citing APA that on November 20-23 the battalion tactical exercises stationed in Nagorno-Karabakh were held, to which a number of units of combined arms and tank units of the central subordination were involved.

Levon Mnatsakanyan, "Defense Minister" of the separatist regime, observed the last stage of the exercise.

It should be noted that a few days ago large-scale exercises with the use of artillery and heavy equipment were conducted in the occupied territories of Azerbaijan.