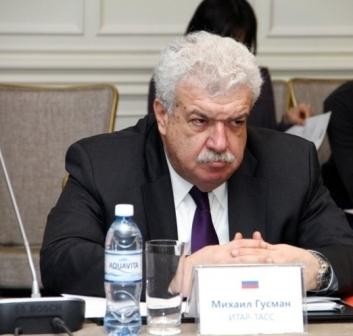 Russia is interested in a fair resolution to the Nagorno-Karabakh conflict based on the documents of international organizations, including the UN in accordance with the principles of international law, Mikhail Gusman, deputy director general of Russia’s state-run TASS news agency, said addressing the 13th Eurasian Media Forum in Astana Apr. 22.

As for the latest confrontation on the line of contact between Azerbaijani and Armenian troops, Gusman said the UN Security Council’s resolutions on the Nagorno-Karabakh conflict have to be finally fulfilled.


“The foreign ministers of Azerbaijan, Russia, and Iran recently met in Baku, where I had the opportunity to talk with Sergei Lavrov, Mohammad Javad Zarif, and Elmar Mammadyarov. Lavrov’s thesis that “the time has come to resolve the conflict” appealed to me,” he noted.

Gusman said that Baku has in recent years become a host place for international forums, political and cultural events, and sports competitions.


Guests from all over the world will come to Baku to participate in the 7th Global Forum if the UN Alliance of Civilizations from 25 to 27 April, he said. “Baku is not just a hospitable city, but it’s also where we can work in a business atmosphere and reach agreement. That is, without doubt, [a result of] Azerbaijani President Ilham Aliyev’s service,” he added.