“Painting a True Picture About Civilians in Karabakh” 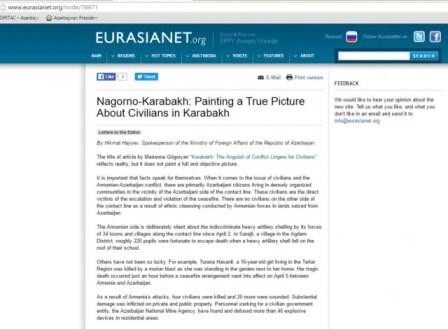 New York-based Eurasianet.org portal has published an article by spokesperson of the Ministry of Foreign Affairs of Azerbaijan Hikmat Hajiyev.

Headlined “Nagorno-Karabakh: Painting a True Picture About Civilians in Karabakh”, the article is written in response to Armenian lies.

The article says: “It is important that facts speak for themselves. When it comes to the issue of civilians and the Armenian-Azerbaijan conflict, there are primarily Azerbaijani citizens living in densely organized communities in the vicinity of the Azerbaijani side of the contact line. These civilians are the direct victims of the escalation and violation of the ceasefire. There are no civilians on the other side of the contact line as a result of ethnic cleansing conducted by Armenian forces in lands seized from Azerbaijan.

The Armenian side is deliberately silent about the indiscriminate heavy artillery shelling by its forces of 34 towns and villages along the contact line since April 2. In Sarajli, a village in the Agdam District, roughly 220 pupils were fortunate to escape death when a heavy artillery shell fell on the roof of their school.

Others have not been so lucky. For example, Turana Hasanli, a 16-year-old girl living in the Tartar Region was killed by a mortar blast as she was standing in the garden next to her home. Her tragic death occurred just an hour before a ceasefire arrangement went into effect on April 5 between Armenia and Azerbaijan.

As a result of Armenia’s attacks, four civilians were killed and 20 more were wounded. Substantial damage was inflicted on private and public property. Personnel working for a civilian government entity, the Azerbaijan National Mine Agency, have found and defused more than 40 explosive devices in residential areas.

A source of recent tension is a new, aggressive military strategy adopted by Armenia. According to media reports, during a meeting with top military officials in late March, Armenian President Serzh Sargsyan revealed that Armenia had obtained “qualitatively new weapons” and was implementing a new that he described as “armed confrontation deterrence.” In reality, this has translated into a much more aggressive posture taken by Armenian forces along the contact line. Armenian provocations and attacks are continuing; a private home in the Tartar Region was heavily damaged by shelling on April 24.

The Armenian side is attempting to divert attention from its responsibilities for the escalation of hostilities in early April. It is curious that most of the audio-visual material that has appeared on social media from Armenian sources was available from the early morning of April 2, the first day of the recent flare-up in fighting. This suggests there was a pre-planned character in the Armenian side’s actions.

The unlawful presence of Armenian forces in the occupied territories of Azerbaijan is the primary cause of hostilities, and also constitutes a major impediment to the political settlement of the conflict. Unfortunately, Armenia’s political-military leadership continues to be held hostage by the past. Armenia’s leadership should start the withdrawal of troops in a full and unconditional manner from all occupied territories of Azerbaijan, as demanded by relevant UN Security Council resolutions, and give a chance to the peace process. The ongoing military occupation of Azerbaijan’s territories cannot produce a solution to the conflict. Lasting peace in the region is a win-win solution for everyone. The sooner the Armenian side reconciles with this reality, the earlier the conflict can be resolved, and the countries and peoples in the region can benefit from the prospects of peace and cooperation.”