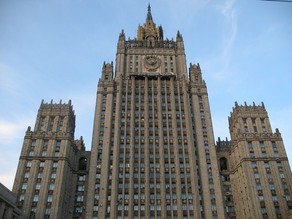 "Promoting to find optimal solutions to the Nagorno-Karabakh conflict on the agreement between the parties to the conflict involing all available tools, including meetings at the high and highest levels was underway last year."

Review of foreign policy of Russian Federation for 2015, prepared by the Foreign Ministry of Russia, declares.

"These initiatives were discussed in detail during the visit of President of the Russian Federation in Yerevan (April) and Baku (June). Intensive dialogue on the line of the foreign ministers continued", the review says.

The document also states that in close cooperation with the OSCE Minsk Group, were held 7 meetings with the leaders of Armenia and Azerbaijan: "The statement of the heads of delegations of Russia, USA and France at the meeting of the OSCE Ministerial Council in Belgrade (December) includes calling on the parties to reaffirm commitment to the peaceful settlement of the conflict and to continue work aimed at achieving a comprehensive settlement on the basis of existing proposals. The meeting of Azerbaijani and Armenian leaders at the end of the year in Bern, with the mediation of the three co-chairs has assisted to clarify the positions of the parties on the most problematic issues of talk process", the review reads.