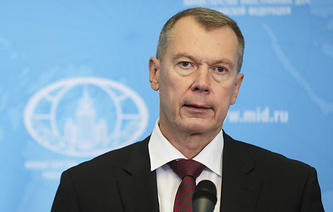 The restoration of Syria’s membership in the League of Arab States will help the process of a political settlement of the crisis and push the refugees toward return, said the head of the Russian National Center for Defense Management Colonel General Mikhail Mizintsev at a session of the headquarters of Russia and Syria on the repatriation of refugees.

"The restoration of Syria’s position on the global scene, in particular, its membership in the League of Arab States is an extremely important issue. It will serve as a convincing signal for the international community about the return of the country to a peaceful life and the promotion of the process of the political settlement of the crisis, as well as push the refugees toward making positive decisions on the return to their homes," Mizintsev said.

He asked the Foreign Ministry representatives to place this issue under special control. The head of the national center also asked to control the situation at the Al Rukban camp, which is seeing heavy humanitarian problems.