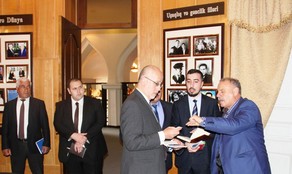 Ambassador of Mexico Rodrigo Labardini undertakes a visit in the city of Ganja.

It was informed at the embassy of Mexico in Baku.

In framework of this visit, the diplomat met with the Chief of Executive Power of the city of Ganja Elmar Valiyev.

In the meeting, the mayor spoke about the rich history of Ganja, its significant role in the Caucasus since ancient times and brought attention to the recent renovation and reconstruction works carried out in the city.

R.Labardini informed about the history of the opening of the embassy, its projects and eventsdone in the country. The diplomat stressed the importance of cooperation between Mexico and the regions of Azerbaijan in many spheres, including economy, culture, tourism and etc. It was noted that Mexico, being the 14th economy in the world and one of the 10 most visited countries could share with Azerbaijan its experience in the relevant areas.

In addition, the Ambassador visited the Azerbaijan State Agrarian University, where he met with the Vice-Rector, Anar Hatamov. It was noted that education and agriculture are important spheres for deepening cooperation between the two countries.