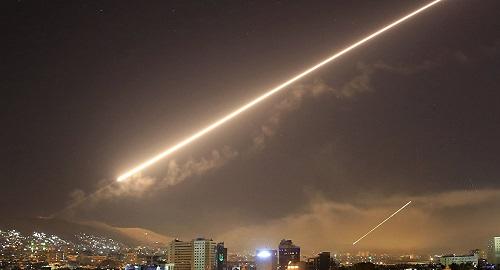 The IDF destroyed an arms depot in Damascus stashed with Iranian weapons.

Earlier, it was reported that the Israeli Air Force conducted airstrikes on targets in the suburbs of Damascus. The majority of the missiles were shot down by Syrian air defenses, according to reports.

Meanwhile, the Syrian Arab News Agency (SANA) claimed that the missiles were launched from Lebanese airspace.

The attack, which lasted for an hour-and-a-half, left three servicemen injured and damaged an ammunition depot.

Earlier in December, Prime Minister Benjamin Netanyahu vowed to continue Israeli operations in Syria to counter Iran's military presence in the country, following the US' decision to withdraw from the Arab Republic.

"The decision to withdraw 2,000 US troops from Syria will not change our consistent policy. We will continue to act against Iran's attempts to gain a military foothold there and, if necessary, even expand our operations," Netanyahu said during a cabinet meeting.

Iran has repeatedly stated that its forces maintain an exclusively advisory role in Syria and denies any plans to establish a permanent military presence in the country.