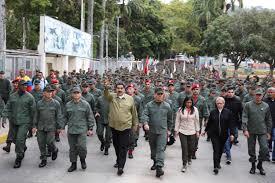 Venezuelan president Nicolás Maduro has appeared flanked by soldiers at an army base in Caracas, in a show of defiance towards his opponents.

Mr Maduro called on the armed forces to defeat "any coup plotter", as clashes between opposition supporters and pro-government forces continued.

Mr Guaidó has urged public employees to strike to undermine the government.

But Mr Maduro praised the army's loyalty. "No-one dare touch our sacred ground or bring war to Venezuela", he said.

In January, Mr Guaidó declared himself Venezuela's interim leader and he has the support of more than 50 countries including the US, UK and most Latin America nations.

As the head of the opposition-controlled National Assembly, he invoked the constitution to assume an interim presidency, arguing that Mr Maduro's re-election last year was illegitimate.