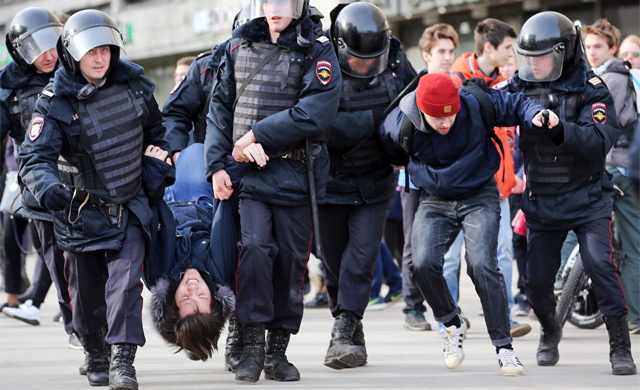 A number of gay rights activists have been arrested after clashing with police at an unauthorised pride march in Cuba's capital, Havana.

Saturday's event followed the unexpected cancellation by the communist authorities of the country's 12th annual march against homophobia.

Activists condemned the move and then organised their own demonstration, largely through social media.

Marching in Cuba without permission can be met with a strong police response.

On Saturday, more than 100 demonstrators took to the streets of the capital. Some said they were subjected to violence after they were stopped by plainclothes security officers.

After setting out on Havana's Paseo del Prado, one of the city's main boulevards, the marchers came up against a large number of police and state security forces.

At least three activists participating in the gay parade in Havana were detained.

Havana's annual gay pride march is an important event for the island's gay and lesbian community, which spent decades in the shadows and under persecution, says the BBC's Cuba correspondent Will Grant.

As such, our correspondent adds, the decision by the government to cancel this year's event was met with disbelief by many of those who had intended to participate.

Last week, the state-run National Centre for Sex Education (CENESEX) said the official Cuban Conga against Homophobia and Transphobia march was cancelled because of "new tensions in the international and regional context".

In response, activists set up Facebook groups calling for a gathering in the capital on Saturday afternoon.