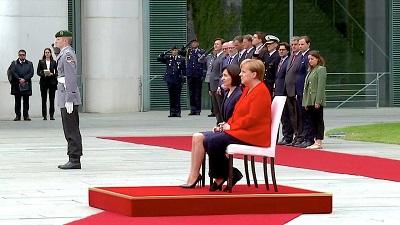 It is noted that it happened during her meeting with Moldovan Prime Minister Maia Sandu.

During the Protocol hearing, they both listened to the anthem sitting.

And the change of Protocol — when the heads of government are sitting during the anthems — is held for the second time.

Notably, for the first time the German Chancellor listened to the anthem sitting at a meeting with the Prime Minister of Denmark in Berlin. Then the Protocol was changed specifically at the request of Merkel.