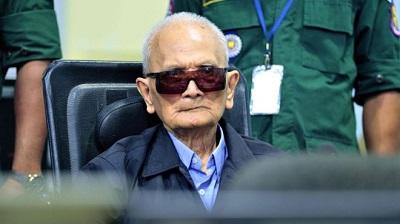 Nuon Chea, a key leader in Cambodia's Khmer Rouge who was convicted of genocide last year, has died at the age of 93.

Known as Brother Number Two, Nuon Chea was second only to the regime's leader Pol Pot during Khmer Rouge rule over Cambodia from 1975 to 1979.

Up to two million people are thought to have died during the Khmer Rouge's four years in power.

In 2018, a UN-backed court sentenced Nuon Chea to life in prison.

A spokesman for the Extraordinary Chambers in the Courts of Cambodia (ECCC) confirmed that the 93-year-old had died in hospital. The cause of death was not announced.