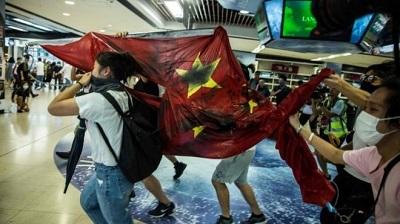 Activists in Hong Kong have desecrated a Chinese flag and vandalised a shopping centre on the 16th straight weekend of anti-government protests.

Escalators and glass panels were targeted at the New Town Plaza in Sha Tin. Police have closed it and fired tear gas at brick-throwing protesters.

The protests were sparked by a now-withdrawn extradition bill but morphed into a wider pro-democracy campaign.

Issues such as universal suffrage, a demand for an inquiry into police actions and the alleged involvement of gangs in countering the protests have come to the fore.

The campaign, mostly conducted by young people, was peaceful to start with but has become increasingly violent.

The unrest has become the biggest challenge to China's rule since Hong Kong's sovereignty was handed back by Britain in 1997.

Hong Kong is part of China, but enjoys "special freedoms". Those are set to expire in 2047, and many in Hong Kong don't want to become "another Chinese city".