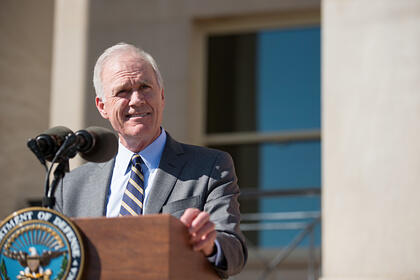 US Navy chief Richard Spencer has been fired over his handling of the case of a Navy Seal demoted for misconduct.

The case of Edward Gallagher, who was convicted for posing with a corpse, had sparked tensions between US President Donald Trump and military officials.

The navy officer had been due to face a disciplinary review where he could have been stripped of his Seals membership.

There have been differing accounts as to why Richard Spencer was asked to resign.

US Defence Secretary Mark Esper said he had lost confidence in the navy secretary because his private conversations with the White House contradicted his public position.

However, Mr Trump said he was not happy with "cost overruns" and how Chief Petty Officer Gallagher's trial was run, and suggested this was why Mr Spencer was fired.