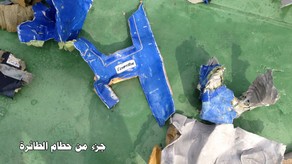 The Egyptian military has released images of items found during the search in the Mediterranean Sea for missing Egypt Air flight MS804.

They include life vests, parts of seats and objects clearly marked EgyptAir.

The plane was en route from Paris to Cairo with 66 people on board when it vanished from radar early on Thursday.

Investigators have confirmed smoke was detected in various parts of the cabin three minutes before it disappeared, but say the cause is still not known.

Speaking on Saturday, French Foreign Minister Jean-Marc Ayrault said "all theories are being examined and none is favoured."