Karabakh conflict should be resolved peacefully 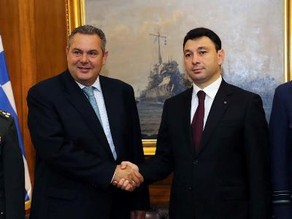 The Nagorno Karabakh conflict should be resolved by only peaceful means.

According to the Armenian media,it was stated by the Greek Defense Minister Panos Kamenos after the meeting with vice-speaker of the Armenian Parliament Eduard Sharmazanov in Athens.

He added that any attempt to solve the problem by the military means is unacceptable.