The ​UN chief urges to reduce the number of IDPs 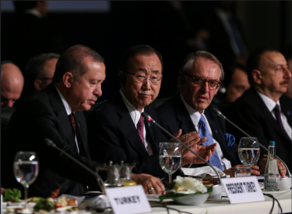 The UN Secretary-General Ban Ki-moon urged to reduce the number of internally displaced persons in 2030 for twice. He said it in his speech at the first World Humanitarian Forum in Istanbul.

The UN Secretary-General pointed out that he proposed holding of this forum 4 years ago, and today the level of concern about the growing number of refugees and internally displaced persons only increased. According to him, today, more and more people are forced to leave their homes.

Ban Ki-moon also thanked the Government of Turkey for the organization of the summit.

Forum continues by speeches of other participants.

The forum will last for two days. The summit is initiated by the UN Secretary General Ban Ki-moon with the organizational support of the Office for the Coordination of Humanitarian Affairs. The summit will be attended by representatives of 177 countries, including 60 heads of states and governments.

The President of Azerbaijan Ilham Aliyev also attends the summit.