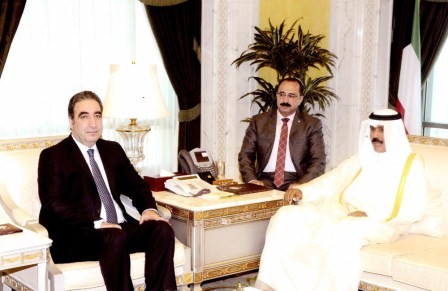 Crown Prince of Kuwait Nawaf Al-Ahmad Al-Jaber Al-Sabah has said his country was interested in overall development of relations with Azerbaijan as he met Ambassador Elkhan Gahramanov.

The Diplomat noted historical, cultural relations created fruitful condition for development of ties between the two countries. Mr. Gahramanov stressed the role of national leader Heydar Aliyev in establishment and development of these ties. The Ambassador emphasized the importance of reciprocal visits in terms of development of ties.

On cooperation within the international organizations, the diplomat thanked Kuwait for supporting Azerbaijan`s fair position over the settlement of the Armenia-Azerbaijan, Nagorno-Karabakh conflict.

Mr. Gahramanov assured the Crown Prince that he would try his best for further developing and expanding ties between the two countries.