Violence along the contact line is a matter of serious concern 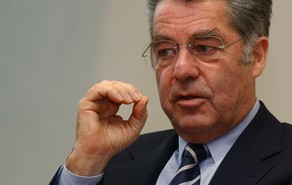 The dramatic increase of violence in 2015 along the line of contact is a matter of serious concern.

President of Austria Heinz Fischer said in an interview with The Business Year 2016 magazine, commenting on the OSCE Austrian presidency in 2017.

The President mentioned that Austria, in general, attaches great importance to multilateral diplomacy and the Austrian OSCE chairmanship will build on the excellent work of the current German OSCE Chairmanship.

"We are fully aware of the central and sensitive issue of the Nagorno-Karabakh conflict. The dramatic increase of violence in 2015 along the line of contact is a matter of serious concern. I am aware of the frustration of Azerbaijan with respect to the efforts of the Co-Chairs of the Minsk group in solving the issue. Nevertheless, we are convinced that the Minsk Group is the only practical platform for conflict resolution", Fischer said.

He stressed that Austria is ready to assist in the progress towards a settlement of the conflict.