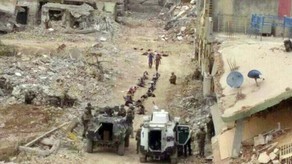 42 PKK militants, including 10 women have surrendered to the security forces in Nusaybin, Mardin province of Turkey.

According to the Turkish media, some of the terrorists, surrendered on May 26 are injured.

According to the information, counter-terror operation in Nusaybin has started on March 14 this year. Since that day, 437 terrorist killed in the region, 400 barricades removed, 35 trenches filled, 1024 home-made explosives detected and destroyed.

Notably, 26 PKK terrorists surrendered on May 25.