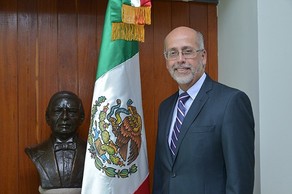 On June 2, Ambassador of Mexico to Azerbaijan, Rodrigo Labardini, met with the Vice Speaker of the Milli Majlis (Azerbaijani Parliament) and Chairman of the Committee on Natural Resources, Energy and Ecology, Valeh Alasgarov, in order to discuss issues of bilateral cooperation, the Embassy of Mexico to Azerbaijan informed.

In the meeting, spent in a friendly atmosphere, Vice Speaker of Parliament reported on the activity of the headed Committee, the functions of inter-parliamentary groups and their positive influence on the expansion of bilateral relations. Ambassador Labardini, in turn, spoke about Mexico-Azerbaijan relations and the dynamics of its development, presented some important facts about the Mexican economy.

In addition, the diplomat highlighted the areas where his country obtained great achievements, acquiring an experience that could be shared.

The parties exchanged views on possible ways for the future promotion of bilateral cooperation in various areas. It was expressed a desire in a strengthening of ties between the two countries.