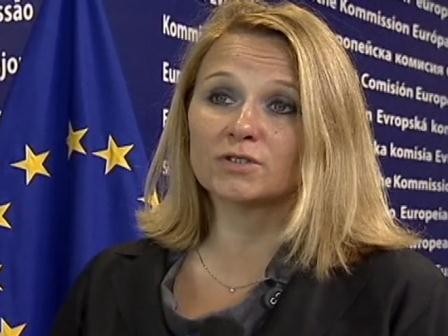 The European Union supports the launch of negotiations on a comprehensive settlement of the Armenia-Azerbaijan Nagorno-Karabakh conflict, says Maja Kocijancic, spokesperson for the EU high representative.

Speaking to Trend on the issue June 6, she added that the EU fully backs the ongoing work of the OSCE Minsk Group's co-chairs.

"The Vienna meeting of the Azerbaijani and Armenian presidents on May 16 was a necessary step in order to advance a peaceful resolution of the Nagorno-Karabakh conflict," she noted.

A meeting was held in Vienna on May 16 with participation of the Azerbaijani President Ilham Aliyev, Armenian President Serzh Sargsyan, the US Secretary of State John Kerry, Russian Foreign Minister Sergey Lavrov, French Minister of State for European Affairs Harlem Desir, the OSCE Minsk Group co-chairs, and special representative of the OSCE chairperson-in-office, Andrzej Kasprzyk.

"The reiterated commitments made by the two presidents to the ceasefire and to the peaceful settlement of the conflict are of utmost importance," Kocijancic further said.

She noted that the agreements reached on measures aimed at the reduction of violence, strengthening the ceasefire, humanitarian issues, and on the resumption of high-level negotiations on a comprehensive settlement in June are also encouraging.

"Such a meeting should take further steps towards the commitments achieved in Vienna," added Kocijancic.