Brawl occurs in the Armenian parliament 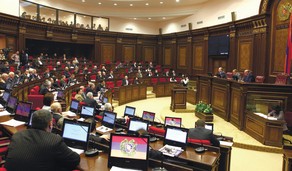 Discussion of the law "On Administrative-Territorial Division of Armenia" has turn into a squabble.

Before the vote, former Prime Minister of Armenia, MP from the opposition Armenian National Congress Hrant Bagratyan argued with RPA MP Vardan Ayvazyan.Deputies tried to intervene to prevent a quarrel.

Parliament Speaker Galust Sahakyan called on the deputies to calm down.

Armenian National Assembly started to discuss the next question, however, contradictions of deputies continued.