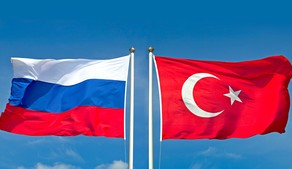 Turkey created "road map" with 9 steps for the normalization of relations with Russia.

Turkey's authority plans to launch a nine-step action plan for normalization of relations between Ankara and Moscow, currently at a historic low after a Turkish F-16 shot down a Russian jet last year.

Following the jet incident, Russia has cut economic relations, put sanctions on Turkish goods, lifted the visa-free regime and banned Russian travelers from visiting Turkey. According to the new action plan for normalizing relations, Turkey will take some steps to return relations to the previous level. From the experience of normalization talks with Israel it has been conducting for 6 years, Ankara does not want any mediator and hopes direct talks will speed up the process.

Normalization before 15 August
Diplomatic sources from Ankara said Turkey aimed to bring the relations to the same level as in the pre-incident period. To achieve this target, Ankara plans to normalize relations before August 15 with mutual actions.

Assess the amount of damage
According to the new action plan, September 1 will be a milestone for the normalization process. Within the three-month period, Turkish related authorities will assess the amount of damage to economic, political, cultural, and social sectors. In the second three months, the political and economic authorities will establish a network with their Russian counterparts to overcome the damages within a short period.

Public Diplomacy
According to Ankara's plan the jet incident will be published with all details that could highlight the pilot's error and insisting on mutual dialog for the normalization.
Turkish soap operas in Russian will be aired and the media will publish articles on Turkey-Russian historic relations especially after the collapse of the Soviet Union.

Working group
To increase relations to the highest level, Ankara will form working groups in institutes that could contribute to the process.

Business unions
Turkish largest business and industrialist associations, including TOBB, TUSİAD, MUSİAD, will actively contribute to the normalization process, under the action plan.

Direct talks
Turkey will not accept any mediator state for the normalization process. Ankara believes that talks under a mediator will slow down the process. It has example of Turkey-Israel relations, which continued for six years after the Israeli raid on a Gaza-bound aid flotilla in 2010. Turkey believes that if there had been no mediator state, the Ankara-Tel Aviv row would have been solved in a short time and plans to start direct talks with Moscow.
Relations between Russia and Turkey seem to take a dramatic turn as the new government under Prime Minister Binali Yıldırım indicated that it would create strong relations with neighboring countries like Iran and Russia.
Ankara's view on the Assad regime is apparently going to be changed as the PYD is advancing to form an autonomous region in northern Syria near the Turkish border that both Ankara and Damascus vowed not to allow.
The latest move from Turkey for normalization with Russia came after Turkish leaders sent a message to Russian President Vladimir Putin celebrating the Russian Day where President Erdoğan expressed closeness between the two countries.
In reply, the Kremlin said it also wants to solve the problems with Turkey and expects the first steps from Ankara.