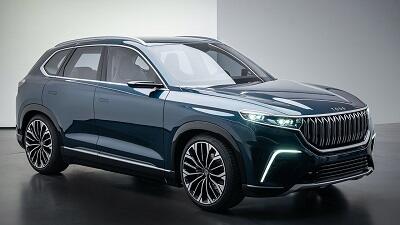 In a first, a Turkish car has been crowned one of the most prestigious design awards in the world, Turkey's Automobile Initiative Group (TOGG) said in a statement on Sunday.

"TOGG became the first Turkish brand to receive such an award and achieved a significant success in mobility with its C-SUV model at the iF Design Awards 2021," it said.

This year, nearly 10,000 products and projects from 52 countries competed in the iF Design Awards, which since 1954 have been accepted as the symbol of design excellence in the international arena.

The TOGG C-SUV, an electric vehicle, won in the Professional Concept category.

"We established our design targets and the technical specs of our automobile based on user insights," said Gurcan Karakas, the group's CEO.

"Crowning our original design with such a valuable award, which we developed inspired by our culture and registered in 27 EU countries as well as China, Japan and Russia so far, motivates us to do better."

TOGG was established in 2018 under the leadership of the Union of Chambers and Commodity Exchanges of Turkey (TOBB) by companies of Anadolu Group, BMC, Root Group, Turkcell and the Zorlu Group via a collaboration.

By 2030, TOGG will produce and own the intellectual and industrial property rights of five different electric vehicle models in Turkey: SUV, b-SUV, sedan, c-hatchback, and b-MPV.