“We must be active on this issue" 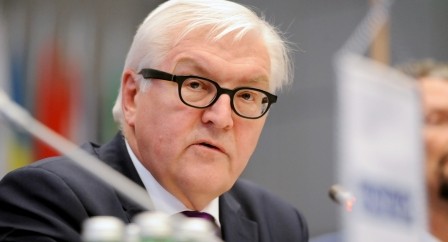 The OSCE is well aware of how dangerous the Nagorno-Karabakh conflict is, said OSCE Chairperson-in-Office and German Foreign Minister Frank-Walter Steinmeier.

He made the remarks during a joint briefing with Azerbaijan’s Foreign Minister Elmar Mammadyarov in Baku June 30.

According to him, nothing is guaranteed of the conflict’s future.

There is a need to come to a conclusion on stabilization and restore peace in the region, noted the OSCE chief.

Steinmeier said all the necessary actions will be taken to strengthen the ceasefire regime.

“After the April clashes, we need compromise and proposals more than before. We want the conflict settled in a constructive way. To settle the conflict, we have to use the presidents’ opportunities to meet, and hold serious discussions for restoration and maintenance of the ceasefire,” he said.

According to him, the OSCE co-chairs are working on peace settlement.

“We must be active on this issue. We want regular discussions to be held for peace settlement. We should take the advantage of the current advancements. Discussions should be held on a regional scale, not only within the OSCE. The status quo is unacceptable and cannot be overlooked. The OSCE role in the region is high. The April clashes showed that the OSCE role is vital. What’s important is that we have restored the ceasefire. And now we’ll try achieve a solution,” added Steinmeier.

He called Azerbaijan a strong player in the South Caucasus region.