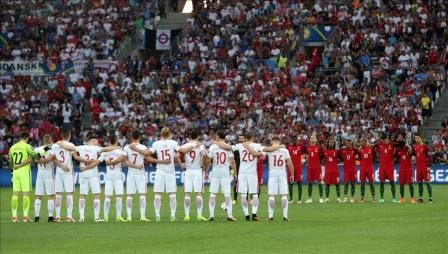 Tributes were paid to victims of Istanbul’s airport terror attack before the quarter-final Euro 2016 game between Poland and Portugal began at the Stade Velodrome in the French city of Marseille Thursday.

According to televised reports, the match between Poland and Portugal in Stade Velodrome of Marseille began after everyone present, including both teams and thousands of spectators gave a standing ovation and clapped their hands to honor victims of Tuesday's attack that left dozens of people dead.

At least 44 people were killed and more than 200 injured when three assailants launched a gun-and-bomb attack at Istanbul’s Ataturk International Airport Tuesday night.

The attackers were identified Thursday as a Russian national from Dagestan in the north Caucasus, an Uzbek citizen and another from Kyrgyzstan, according to a prosecution source, who is familiar with the investigation but spoke on condition of anonymity due to restrictions on talking to the media.