"Russia isn't trying to exclude OSCE MG from the process" 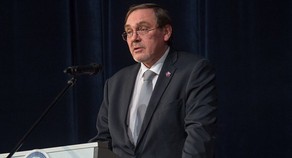 Having organized a meeting of the Presidents of Azerbaijan and Armenia in St. Petersburg, Russia did not make an attempt to exclude the OSCE Minsk Group from process of Nagorno-Karabakh conflict settlement.

Tert.am reports that it was stated by Russian Ambassador to Armenia Ivan Volinkin.

"Russia has been working in the framework of the OSCE Minsk Group and other formats provided in this matter. It is not a precedent, when the mediators are making efforts to organize a meeting of the warring parties. The US and France have also organized similar meetings, we also initiated the meeting, and it does not go beyond the MG format"- said the ambassador.

Ivan Volinkin noted that such meetings are crucial to resolve the conflict and arise the mutual trust.

Commenting on the question of at what stage the settlement of the conflict is, the ambassador said that this is not an issue that can be solved in one day.