Putin is more fair than the US and will not retaliate 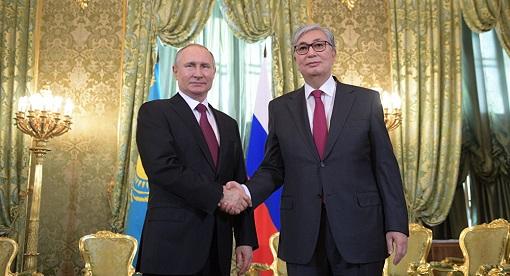 1) How do you evaluate his statement. Do his arguments have any logical, political or historical base?

These close allies’ different positions on this sensitive issue are due to their different roles in the global systemic transition within which the New Cold War between the US-led West’s Golden Billion and the Global South is unfolding. Kazakhstan remains a key player in multipolarity due to its membership in the Eurasian Economic Union (EAEU), SCO, and CSTO, but it also retains its strategic autonomy insofar as it won’t always do whatever its top Russian ally does.

Some external parties are insincere in their attempts to understand the differences between these two, the reasons behind them, and what they could lead to are instead seeing a self-interested chance to divide and rule them by provoking a split between their societies over this sensitive issue. It’s therefore important to remain focused on the facts, continue to interpret them in good faith, and avoid over-exaggerating this particular difference between Russia and Kazakhstan.

2) What will President Putin's public reaction be to his remarks?

The Russian leader acknowledges Kazakhstan’s strategic autonomy vis a vis his country and still regards it as a trusted ally in the sense of being able to rely on it to facilitate the emerging Multipolar World Order through its membership in structures like the EAEU, SCO, and CSTO. It’s natural for any pair of countries to have occasional differences, even over sensitive issues, but what’s most significant to pay attention to is how they manage this whenever it happens. The US, for instance, aggressively pressures its partners – who Russia has said that it mistreats as colonies and vassals – in order to coerce them into unilateral concessions on issues that they regard as being in their objective national interest. Russia, by contrast, respects Kazakhstan’s strategic autonomy and won’t replicate America’s approach. This observation shows that Moscow is a more mature and responsible player in International Relations than Washington is.

3) Will this statement affect future of the Russia-Kazakhstan relations?

No. The Russian-Kazakhstan Strategic Partnership will remain unaffected by this difference despite it being over a very sensitive issue. Their mutually beneficial cooperation on a wide range of issues – especially within the EAEU, SCO, and CSTO – will continue. Neither country suspects the other of any ill intent at the official level but it’s important for their respective societies to have the proper understanding of this disagreement as was explained in the last two answers.

4) Can Kazakh President's remarks cause a stir within CSTO?

No, that also won’t happen. The CSTO is a mutual defence organization comprised of universally recognized states, not partially recognized ones like Abkhazia, the Donbas Republics, etc. Russian-Kazakh cooperation within it has nothing to do with their political differences over the self-proclaimed entities in Eastern Europe. Kazakhstan never recognized what Russia regards as Crimea’s democratic reunification with its historical homeland in 2014 yet Moscow still saved it during last January’s events.