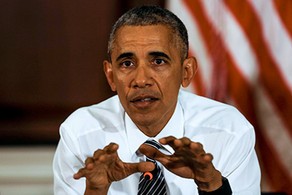 President Barack Obama has condemned the 'horrific terrorist attack' that has left at least 80 people dead and more than 50 injured after they were mowed down by a truck in Nice, France.

According to the Reuters, Obama said America's 'thoughts and prayers' were with the families of the victims, who were watching Bastille Day fireworks when they were killed on Thursday night.

'We stand in solidarity and partnership with France, our oldest ally, as they respond to and recover from this attack,' he said in the statement released by the White House.