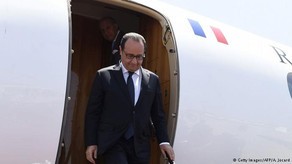 French President Francois Hollande and Prime Minister Manuel Valls arrived in Nice, where a day before was committed a terrorist attack killing 84 people.

At the airport of Nice, the head of French state and Premier were met by the Interior Minister Bernard Cazeneuve, Head of the Provence-Alpes-Côte d'Azur Christian Estrosi and other officials.

As expected, they first will go to the main hospital in Nice, to see victims of the terrorist attack and to express their support.